My interest in the Fogny Bible continues in today’s blog post. One especially intriguing aspect of the Fogny Bible is the presence of handwritten marginalia, or notes, littered throughout the book. The reason I am so interested in the marginalia is because it personalizes an otherwise impersonal object. Handwritten marginalia and other marks, such as underlining, are a window into the aspects of the bible that resonated with a particular person.

In regards to the Fogny Bible, with the help of Dr. Boeye, I have found who I believe to be one of the owners of the book. I say one of the owners because there were at least two different people who have written in the book, based on the differences in the script and ink used. There is a handwritten inscription on the title page of the bible naming the owner as “Joann Brandmiller” and goes on further to discuss his role as a priest in Basel. Dr. Boeye informed me that “Joann” stood for the name “John”. 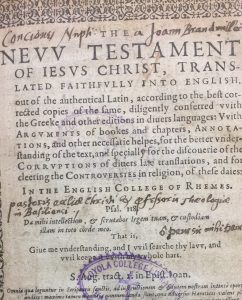 There is one particular portion of marginalia on page 313 in the book that leads me to believe that it was being used in an educational manner. There are lines of the English text printed in the book that are underlined, and in the margins are their translations into Latin. This could be James practicing his Latin translations and his grasp on the language that is so vital to Catholic priests of the time. Mass would have been said in Latin at the time so an understanding of the content of the bible, in Latin, would have been crucial. 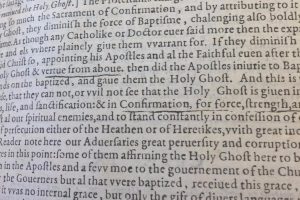 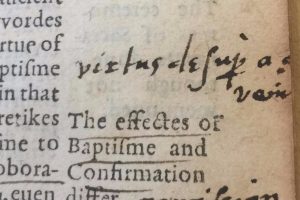 Although there are markings by different hands throughout the book, I know that these are from the hand of James Brandmuller due to a comparison with the writing of his name itself. Part of the marginalia on page 313 is the word “sinnes”, when compared to “Joann” on the title page, the double ‘N’s are identical. 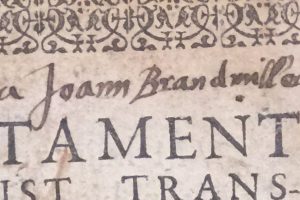 Another portion of marginalia that leads to me to believe that this was used for religious education would be the handwritten table and explanation of feast days and holidays in the Catholic Church found in the Preface to the Reader portion of the Fogny Bible. Brandmuller could have used this as a reminder during his education of the priesthood. Marginalia is so important because not only does it provide us with a direct connection to the past, it also allows us to gain a better understanding of the variety of ways in which bibles, as objects, could have been used.