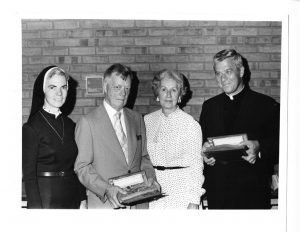 Student researchers in the class The Bible as Book: From The Dead Sea Scrolls to Gideon’s Bibles were given the choice of 30 bibles to chose from within the Loyola – Notre Dame Library’s Special Collections. Of the twelve bibles selected from the collection for research, seven are from The Marion and Henry J. Knott Collection of Fore-edge Paintings and are superb examples of the art form. The Library is indebted to the Knott Family for their extensive generosity to our collection and for making such a unique learning opportunity possible for students.

Henry Knott’s interest in collecting fore-edge paintings started at the suggestion of the late Mr. Joseph Ruzicka, the noted bookbinder. Fore-edge painting is done usually in watercolors on the inner edges of a book while the pages are fanned open. Once the book is closed, the painting becomes invisible underneath the decorated gilt edges. The art form seems to have originated in England during the 17th century and stands as intriguing facet of the books arts that deserves more extensive research and wider recognition.

The Marion and Henry J. Knott Collection of Fore-edge Paintings consists of over 300 volumes dating from the 16th–20th century with the bulk of the collection dating to the 19th century. At the time of its donation, the collection was the second largest of its kind in the country.

The Archives & Special Collection is extremely pleased to be working with Dr. Kerry Boeye on an upcoming art history course being offered in Fall 2017 that will focus specifically on The Marion and Henry J. Knott Collection of Fore-edge Paintings. The class will entail a digital scholarship component and will culminate in a physical exhibition of books in December 2017 at The Loyola-Notre Dame Library. The exhibition will be celebrated as part of The Book Arts Baltimore Festival