For this post, I really wanted to delve further into the provenance of these texts. Luckily for me, my Bible and prayer book have hand-inscribed notes at the front of both texts noting outright that the pair was given as a wedding gift, as well as both the giver and the recipient. The Bible and prayer book were given to Henry James Lee Warner by his sisters, Anne and Mary. After doing some research on sites providing ancestral histories, I discovered that the Warner family hailed from Hereford, England, and that all of the Warner children (from Henry, Anne, and Mary’s generation, at least) were born and grew up there. This led me to an interest in the area, as well as the family’s ties to that region. After a bit more research, I found that Henry James Lee Warner appears in several public records from the 19th century, and that he was quite involved in the passing of several statutes in Hereford. This leads me to believe this family was relatively involved, well-known, and at least somewhat successful in the region.

This discovery of the family’s location connects to another fascinating aspect of the texts: the fore-edge paintings on both the Bible and prayer book. When examined closely, they depict a stunning countryside, with a church in the scene. One book shows the front of the church, while the other provides a more removed, distanced view of the structure from a different side angle. Dr. Boeye suggested that I research cathedrals from that portion of England. Upon doing so, I have discovered that the church found in the fore-edge paintings is, in fact, the Hereford Cathedral, exactly where the Warner siblings grew up and lived. The architecture shown in the paintings seems to match up fairly well with modern photos of the cathedral and surrounding areas. Despite a bit more development in the region today, the basic structure and layout of the Hereford area remains the same, and matches the paintings. 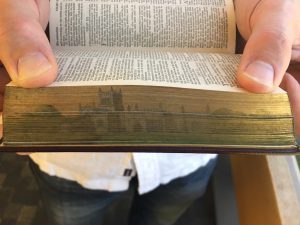 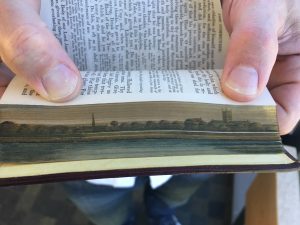 This phase of the process was absolutely fascinating to me. I loved piecing together several aspects of the texts to discover more about the origin of the books. Doing so allowed me to create a more cohesive picture of the Warner family: what they did, where they were from, and what they held dear to them. After this, it is clear that the family had strong ties to their “home base,” if you will, and Mary and Anne wanted their brother to always have a bit of home with him, especially as he entered a new phase in his life – marriage. I look forward to discovering more about this family and this pair’s provenance.