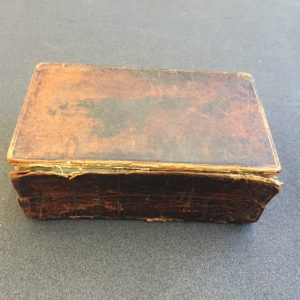 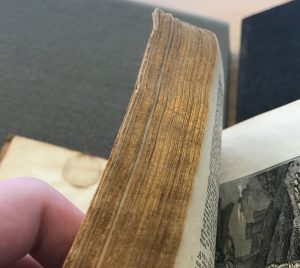 Just from looking at the outside of this bible, it does not seem as though this particular book has much to offer. The plain, dark brown leather cover is well worn and falling off. This bible is a King James Bible with the title “Bible with Engravings” written on the side. This is a small, well used bible with thin white pages that is similar to the bibles we see today. 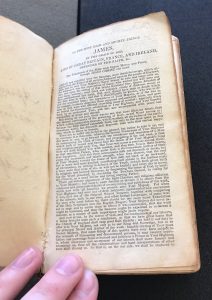 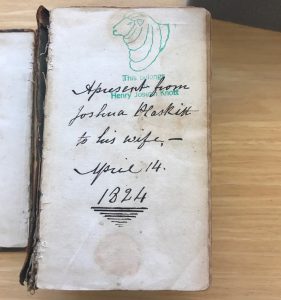 This Bible has a history related to the Plaskitt family, hence how it received the name, “The Plaskitt Bible”. When I was initially researching this bible, Anna was kind enough to send me the history of the Plaskitt family that was researched last year by her volunteer Cynthia Requardt. This information states “PLASKITT FAMILY LIBRARY: One of the collections donated by the Knotts was the library of the Plaskitt family who lived in Baltimore County, MD.  John Plaskitt (1794-1867) was a printer-bookseller (Armstrong & Plaskitt) before retiring. Many of the books belonged to a younger generation and include religious and juvenile literature and school books from the mid-19th century.” 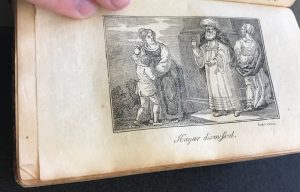 Aside from the family history of this bible, there is another special aspect that can be found inside the pages. This pocket bible has 169 engravings inside of it.

At the back of the book, there is a page that lists the bibles that were published by the publishing companies and their prices. On that page, we can see that this is the pocket edition of this bible in fine paper, with 169 engravings, bound in black calf, with gilt edges. We can tell that this bible must have originally been black because of the gilded edges of the bible. This feature was not available on the morocco version. We can also tell that the engravings were added in later because there was a mistake made on one of the pages with an engraving on it. This page is shorter than the others. This shows that the basic bible was mass produced but the special aspects, like the leather and engravings, were added in later in order for the buyer to customize their bible to their tastes. 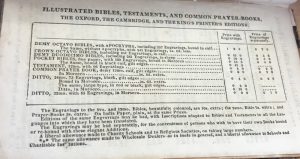