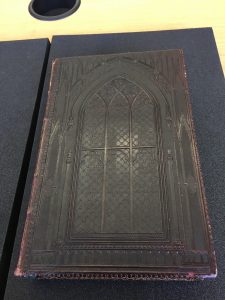 The Holy Bible including The Psalms of David in Metre: Translated and Diligently Compared with The Original Text, and Former Translations, which henceforth will be referred to as the Scottish Bible, was printed in Edinburgh in 1830, and is an example of a Kings James Bible. The Scottish Bible measures 8.5 in x 5.5 in (21.5 cm x 14 cm) and is bound with a dark brown stamped leather with the architectural elements of a Gothic cathedral adorning the front and back covers.

The Scottish Bible was printed and translated by  Sir D. Hunter Blair and M.S. Bruce (New Testament) and Sir D. Hunter Blair and M.T. Bruce (Psalms of David), printers to the King’s Most Excellent Majesty. The phrase “printers to the King’s most Excellent Majesty” or a letter addressed to King James I attesting to the legitimacy of the biblical translation is standard in King James Bibles and coincides with their status as authorized versions of the Bible. This means that the Scottish Bible follows the standard format and translation of other King James Bibles (including the English Bible) and will include the 39 books of the Old Testament, 14 books of the Apocrypha, and the 27 books of the New Testament. The authorization, however, refers not to the text itself, but to the fact that only a select few printers in Great Britain were authorized by the king to print the King James Bible. 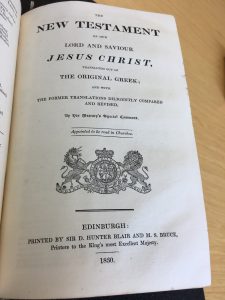 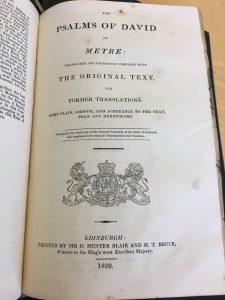 The Scottish Bible’s status as a King James Bible can also help to explain the lack of illustrations in the text. King James Bibles followed the standard format established by its first printer Robert Barker in 1611, which included only the text. Illustrations were used by various printers beginning shortly after the creation of the King James Bible in the early seventeenth century and allowed printers to circumvent royal patents by differentiating their Bibles from the King James Bibles. However, the lack of illustrations in the Scottish Bible could also help to explain the presence of the magnificent fore-edge paintings depicting a view of the Rhine River and German countryside. The fore-edge painting could have been commissioned not only to make the Scottish Bible more aesthetically pleasing, but could also be an indication of the interests of the Bible’s owner. 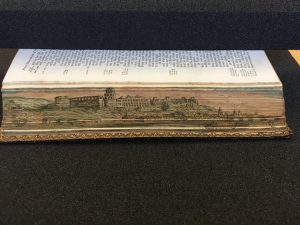 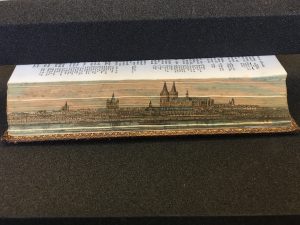