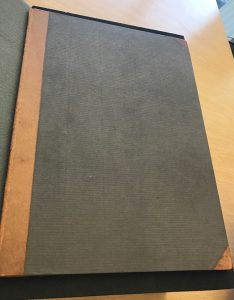 Cover of Corinthians I and II

This particular bible is not a complete bible at all. It is only Corinthians I and II that was taken from its original binding in a complete bible and bound separately. Looking at just the outside of the book, it seems very plain. There is a plain cover that looks very unassuming. When you open it, you find the only parchment bible in our exhibition. The parchment is animal skin that is treated and pulled thin like paper. On the parchment, we can see that this bible is written in Latin.

Because this book has been rebound, the original information that tells us its origins has been lost. The only information available was the notecard that was inside of the book. This notecard identifies this as belonging to Reverend Monsignor John Fletcher, of Malden, Massachusetts and that it was executed somewhere in the region near Monte Cassino, Italy in the 16th century. This is contradicted by the pencil marking in the top left corner on the inside of the front cover of the book that identifies this as from the 15th century. 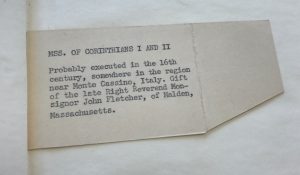 Information about Corinthians I and II 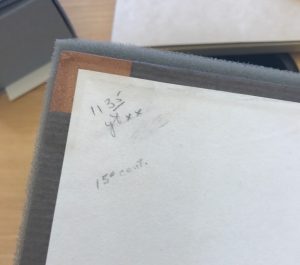 Pencil Marking on Inside Cover 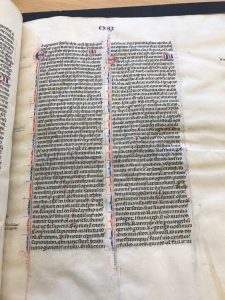 Originally, it was thought that this was a printed bible, but it is much older than that. It is handwritten which can be determined by the ruling lines that were used to make sure that the script is in a straight line, which would have been completely unnecessary if it was a printed book. The ruling lines are there for the scribe to write on to keep the text in a straight line. It can also be determined by comparing the script of this bible to printed bibles of the 15th and 16th centuries and also manuscripts from earlier periods. From those comparisons, it can be determined that this bible is from Italy in the 14th century. To learn more about the process of comparing the scripts please refer back to this blog post: http://loyolanotredamelib.org/bibleasbook/index.php/2017/04/07/plaskitt-family-bible-and-investigating-corinthians/

Looking at the inside of the bible, there are historiated initials with gold accents that contain Saint Paul. There are also red and blue swirls that cascade down the page. This shows that this bible was originally made for someone who had a lot of money and could afford the lavish decorations and gold gilding. 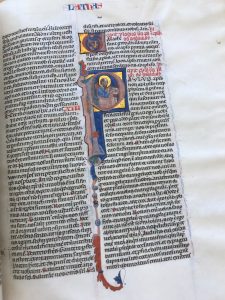 Page of Corinthians with Historiated Initial 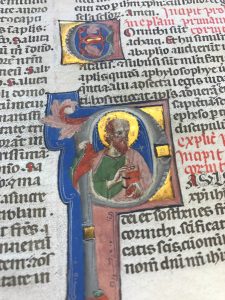 Also inside of the bible is the abbreviation “omib”. Omib is an abbreviation of “om[n]ib[us]”. Omib is written on the last folio of the signature and is known as a catchword. The catchword is connected to the first word on the page of the next signature. These catchwords were used by the book binders to make sure that the signatures were in the right order. This shows us that the dealer who originally cut up the original bible thought that binding together Corinthians I and II would be more attractive to buyers than selling them separately. 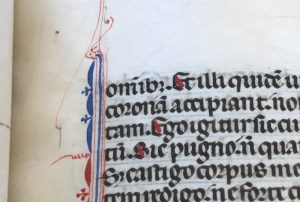 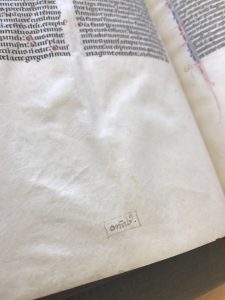