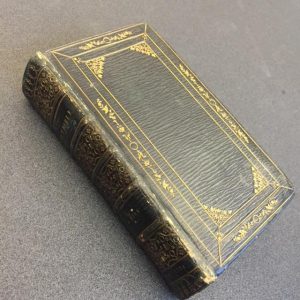 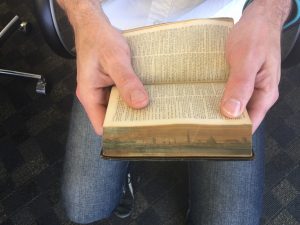 The production of Bibles is an interesting and often overlooked issue. Economics and business come into play when discussing a certain bible in particular: The King James Bible. The King James Bible, also known as the “Authorized Version” of the bible was first printed in 1611. The book is dedicated to King James I who is the one who initiated the translation into English. This “authorization” has nothing to do with the actual text within the bible; it instead refers to the fact that only certain publishers were authorized to publish the text.

The official authorization of the bible by King James I was not the first time that privilege was given to certain publishers in England. This practice began in the 16th Century. In 1589 Queen Elizabeth gave Christopher Barker the exclusive right to publish bibles in England. The authorization remained in the family as Christopher Barker’s son was the one who received the authorization from King James I. Monopolies were banned in England in the year 1623, yet the patents used in order to allow only one publisher to print bibles were exempt from this law. Therefore, the Barkers had a monopoly on bible printing at this time. Even though the right to print the Authorized Version of the bible was extended to the royal printer in Edinburgh and university publishers in Cambridge and Oxford in the 17th century, that still meant that the bible market was dominated by few.

In order to tap into the profitable demand for Bibles in English, other printers cleverly sought ways to distinguish their editions of the Bible from the Authorized Version as a way to circumvent patent laws. During the seventeenth century, for instance, bookmakers would take woodcut prints that were circulating that included biblical iconography and sew them into existing Authorized Versions of the bible. This made the books different enough from the Authorized Version to avoid violating patent law, which thus enabled the bookseller to market them legally. Another way in which images were used to change Authorized Versions of the bible were Gospel Harmonies, which were made by cutting up already printed bibles and illustrations and pasting them together to create an entirely unique text.

Illustrations were not the only way in which printers could avoid the royal patents restricting the creation of bibles. Another way in which printers could avoid this was by adding commentaries or notes to explain the passages of the bibles. Therefore, the bookmakers argued that it could not technically be considered a Bible and instead they were called commentaries. The bibles maintained the exact text of the Authorized Version and as time went on and printers saw that they could get away with avoiding the patent in this way, commentaries became shorter and shorter.

One of the bibles in the library’s collection is one of these commentaries. The Pine Bible, as referred on this site due to its printer’s name, William Pine, is a bible printed in 1774 in Bristol, England. Although he did not hold a royal authorization to print Bibles, William Pine, like many other enterprising printers, did not let that deter him. The small book contains no illustrations or images. There is only the biblical text with portions entitled “Commentary” after every chapter. 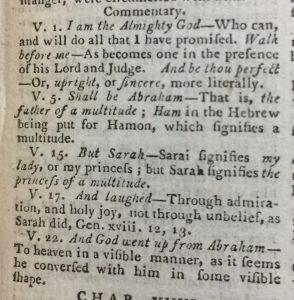 The commentaries deal with only certain verses and are very brief. They at times only reflect about the use of a single word and the meanings that could be derived from it. The book clarifies its role as a commentary on the title page. This is the page in the Authorized Version that usually contains the preface to King James I. The title reads, “A Commentary on the Holy Bible: Containing the Whole Sacred Text of the Old and New Testaments; with Notes Explanatory, Historical, Critical, and Practical.” 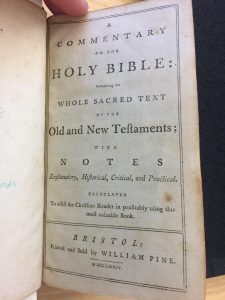 The title page highlights that the book still contains the complete text that one could find with the Authorized Version, but also ensures its role as a commentary, which enabled William Pine to enter the profitable market of bible sales while avoiding any legal repercussions associated with patents.