The topic of our class is to learn about the bible as a book rather than a religious text. Wrapped up in this interpretation of the history of the bible as a book is the idea of the bible as an object in and of itself. Bibles have had many different styles depending on their particular function, such as larger and more decorative bibles being used in a church while smaller and more modest bibles were more for personal use. Figuring out what a certain bible may have been used for can be determined by looking closely at the bible’s physical attributes.

The Die Bibel is the more decorative bible of the two that I am researching and is pictured below. 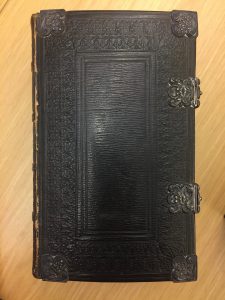 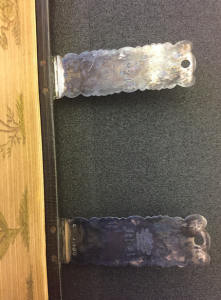 As you can see, the front of the bible has a thick decorative border that almost looks like a line-up of flowers facing inwards. The back of the bible looks exactly like this and the binding has similar patterns with “Die Bibel” inscribed onto it. The metal corners and clasps are another decorative element (side note: the potential publication date that was pondered in my previous blog post has been identified as 1824 as seen on the inside of the top clasp. The initials “M.B.” with a crown above it on the bottom clasp could potentially be the person who commissioned the bible). The bible is small, around 4.5 x 7.5 x 2.5 inches, which means that it was likely used personally by our mysterious “M.B.”. The amount of metal could indicate that the commissioner had money to spend on it, assuming these decorations were added at the time of binding. Flipping through the pages, it can be noted that they do not have the distinct browning on the edges towards the bottom corners. This browning occurs from the paper reacting over time to oils or dirt from the readers’ fingers, and indicates a book well-read. Though this bible was clearly meant for personal use due to the size and the initials in the clasp, the pages reveal that it was not read very often or at the very least not to the extent that one would expect someone with a personal connection to their bible would read. Upon first consideration, it could be that the person who commissioned it was not a very religious man, though this can be eliminated as a possibility when you consider that they would not have paid to have a bible made for them when they knew they would not read it. The more likely reason is that the bible was never meant for reading, just for looking at. In this case, the commissioner wanted their bible decorated because they value it more as an object rather than a text. It is likely that they had another bible that appeared more modest on the outside and functioned as their reading bible while this one was displayed closed and could be opened for occasional perusing. Considering these aspects to the Die Bibel, it can be seen as a good example of bibles being valued as objects as well as religious texts.