This week I set out to answer some of the questions I had about my books. In my last post, I focused on the relationship between the fore-edge painting and the book itself. I was interested to see if there were direct connections to the owner of the book, the plot, the cultural context, the publisher, or the book binders. However, while doing research and during class, it became apparent that some, if not many, fore-edge paintings were made later in order to increase the significance or value of the book. In my research I hope to answer why the fore-edge paintings exist.

Today I will be focusing on my first book, Hurd’s Sermons, which has double fore-edge paintings. The first is a landscape of the town of Pembroke and its castle after a Richard Wilson painting and the second is a landscape featuring Ripon Minster after a Thomas Girtin painting (originally written as Richard Girtin on the book). Since both fore-edges are based off of earlier paintings, I decided that researching the original artists and the paintings would be a good start for research. I found that Richard Wilson (1714-1782) was a Welsh landscape painter who worked in Britain and Italy. He was known as a pioneer of landscape painting and was inspired by Claude Lorrain and Gaspard Dughet and was also a founder of the Royal Academy. I found the Wilson painting titled Pembroke Town and Castle, which is located at the National Museum of Wales or Amgueddfa Cymru. The painting is dated 1774 and is oil on canvas. The museum cites Wilson’s landscapes as popularizing images of Wales. Looking at the original painting and the fore-edge, it is easy to see a resemblance, especially between the buildings. However, the perspective of the fore-edge is much different (See figs. 1 and 2). 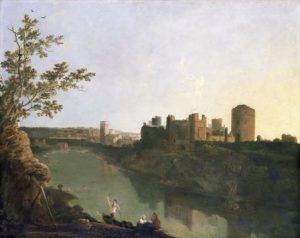 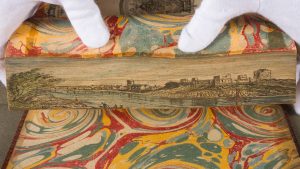 Thomas Girtin (1775-1802) was a British artist who was known for establishing the aesthetic of watercolors. He went on various sketching tours throughout England and Paris during his life. I found that his painting titled Ripon Minster, Yorkshire is owned by the Yale Center for British Art. The painting is a watercolor with pen and black and brown ink and is dated 1800. Looking between the original painting and the fore-edge, the images are extremely similar. However, the fore-edge, whether due to artistic choices or the medium, has more clarity and detail – it does not achieve the same airiness of the original Girtin painting (see figs. 3 and 4). 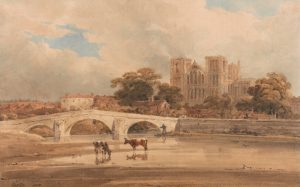 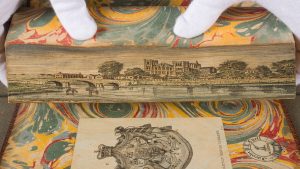 Since the book was gifted to the Prince of Wales in 1776, the fore-edges must have painted at a later time. Although Wilson’s painting existed at the time, Girtin’s would not be painted for another 24 years. Potentially the one fore-edge may have been painted first, however it is more likely these were added later in the book’s life.