When I was looking through Francis Bacon’s book, Sylva Sylvarium: or, A Natural History (Knott 165), I noticed a signature on the third page— “T. Holt White.” This name seemed kind of random; it did not match any of the publishers or owners stated later in Bacon’s book. Because of this, I thought that maybe “T. Holt White” was the owner or publisher that commissioned the fore-edge painting and, probably, the recent binding. 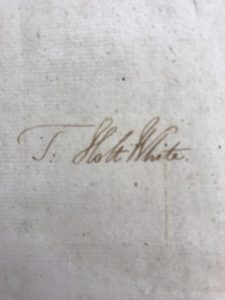 One of the hardest things about researching fore-edge paintings is that there really is not much information about the painting, including the artist, title, and date, in the book. Fore-edge paintings really became popular in the 18th and 19th centuries, meaning that a fore-edge painting that was found on a late 16th– or early 17th-century book most likely was not made at the same time that book was published. I was excited when I found this signature, “T. Holt White,” and hoped that it would give me some information regarding the painting. When I researched T. Holt White, I was immediately presented with the name, Gilbert White. Gilbert White was an English naturalist who wrote The Natural History and Antiquities of Selborne (1789). His estate in Selborne, The Wakes, is now the Perivale Wood Local Nature Reserve and holds the Gilbert White Museum. His brother, Thomas Holt, was born in 1724 and died in 1797. He also wrote essays regarding natural history, but focused primarily on the trees of Great Britain. He was elected to the Royal Society in 1777 and was very wealthy through the trade and manufacturing of iron goods. I am still not sure whether this Thomas Holt White is the person behind the signature on Bacon’s book, but I think it is worth looking into. Thomas Holt was a part of the Royal Society, which was originally founded by the followers of Francis Bacon. Because Thomas Holt was extremely wealthy and had an interest in the natural sciences, he could have collected this edition of Bacon’s book. It then could have been sold or included in a family collection. Also, the son of Thomas Holt, who was also named Thomas Holt White, was a book editor. He is best known for editions of John Milton’s Areopagitica. But, Thomas Holt Sr. and Gilbert White’s brother Benjamin owned a more famous publication business called “Horace’s Head” on Fleet Street. He made a fortune publishing various editions of natural history books, including Thomas Pennant’s British Zoology. It is interesting that Fleet Street is mentioned in Bacon’s book as one of the publishing places of previous editions. I definitely still need to keep researching this to determine if these are even useful connections, but, if they are, I also need to figure out how they relate to the actual painting. I also need to look into the other Thomas Holt White that I found, who demonstrates a different kind of relationship to Francis Bacon, specifically in regard to Grays-Inn (mentioned in Bacon’s book). Hopefully, through more research on these possible connections, I can figure out who actually commissioned the painting and, maybe from there, who painted it.