What are the Club minutes? 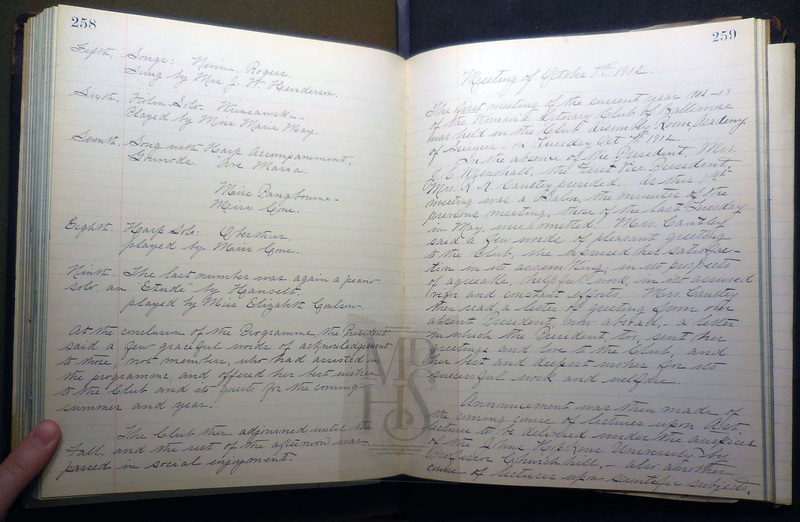 The Woman's Literature Club of Baltimore papers at the Maryland Historical Society include over 3,000 pages of minutes of Club meetings recorded between 1890 and 1920. Although the Club continued to exist through the 1930s, minutes for the 1920-1941 period are no longer extant.

Minutes of Club meetings are organized by season and grouped by decades in the links to the right. Minutes were taken by the Recording Secretary, who customarily entered into the Club minutes book. On occasion, however, other officers or Club members transcribed the minutes into the Club minutes book based on the notes of the Recording Secretary or her appointed substitute.

Each season began in October and ended in May or early June. Salons were held roughly monthly and often included musical performances as well as readings of poetry and essays, and addresses to the Club from Club officers and notable guests.

Board of Managers meetings were held bi-weekly or monthly, depending on the needs of the Club and the inclination of Club officers; minutes of these meetings are included here also. They show the Club's officers making organizational decisions, working out disagreements, and discussing the identity and future direction of the Club. Minutes of these meetings were sometimes included in the regular Club minutes notebook, but for many years were kept in a separate notebook. Each file indicates whether the minutes pertain to Club meetings generally or to Board of Managers meetings only.

All materials included here are held at the Maryland Historical Society and are reproduced here with permission. Those seeking to consult the original documents should contact MDHS.