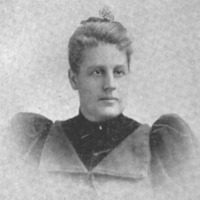 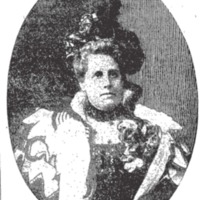 Octavia Bates was a prominent clubwoman who had worked extensively to extend women’s rights before she joined the Woman’s Literary Club in 1903.  Bates was born in Detroit, Michigan and earned a BA from the University of Michigan in 1877 and a law degree in 1896. Throughout her career, Bates advocated for female suffrage, women’s dress reform, and changes in divorce and marriage laws. Bates was active in organizing women’s presence at the 1893 World’s Fair and presented several papers on suffrage, dress reform and women’s clubs. She was a board member of the General Federation of Women’s Clubs and helped organize the International Council of Women meeting in London during the Queen’s Jubilee in 1899. Bates once wrote that 95% of women’s diseases were due to corsets, tight neckbands, dragging skirts and other woes from the “false system of dress.”

In 1900 Bates made an extended visit to Baltimore, staying with Dr. Nellie V. Mark, an early member of the WLCB who was also active in women’s issues. As a Club member,  Bates served as the Chairman of the Committee on Letters and Autographs and presented papers on Foreign Travel and Foreign Languages. She was also an active member of the Maryland Line Chapter of the Daughters of the American Revolution. After her death, the Club remembered her as “a woman of wide culture and thought, her talents essentially forensic.”